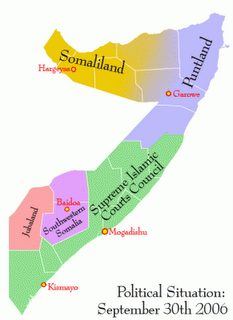 Somalia has not been a unified country since 1991 when the dictator was overthrown. The 1990s were a time of battling warlords in the south and political seperation in the north. The 2000s have seen an attempted rebooting of the country and a Jihad. The situation is grim and can possibly turn into Taliban Afghanistan bad.

South
Right now is an important time in Somalia. The al-Qaeda supporting Islamic Courts Union is preparing for a deathblow by attacking the temporary capital Baidoa. Ethiopia has sent troops to try and to turn the tide. If the government and its allies can stop the ICU then maybe a potential future major conflict can be avoided. If not, then expect to hear about Somalia for a long time to come.
Posted by Catholicgauze at 12:08 AM

Email ThisBlogThis!Share to TwitterShare to FacebookShare to Pinterest
Labels: War on Terrorism

First of all, the transition government in Somalia is not recognized by most people in Somalia. It was a government that was created, not elected by outside parties. Somalians did not have a say in it, so how can it be their governemnt. Secondly, Im not so sure if the ICU is bad for Somalia. If you read into the history of Somalia since the early 90s, one will see that the country was ruled by warlords. We all remember "Black Hawk Down." We wanted to get rid of a warlord in Somalia similar to what the ICU has been doing. Yes, we might not agree that the ICUs laws are perfect and equal, but they are definetely much better than the way Somalia was governed prior to them taking power. They have not executed anyone for watching football on tv as this blog states, they have only threatened to do so. Even if they do, look at all the good things they have done. Warlords are not running loose in the country killing people indiscriminantly for control of resources. There is stability in the country after a long long time. People can walk out on the streets without having to worry about being robbed or even shot. Many, infact the majority of people in Somalia now feel that they are better off (read the news) then they were before the ICU took over. Yes the ICU may sympathize with Al Qaeda but that is none of our business. Most people in the Muslim world may sympathize with Al Qaeda. This is the political atmosphere right now. So your statement that ICU is bad news for Somalia is a mere personal opinion and not fact . The majority of Somalians will completely disagree with you and thats the real news that people should pay attention to and not what some of us might think. When will we get it in our heads that a Western style democracy will not work for everyone. In fact many countries do not want that. I think the U.S. should learn to be a good global citizen by building bridges and glueing gaps with the rest of the world rather than be the big bad bully that everyone else seems to see us as except us. Open thy eyes and thou shall see the truth.

Yes, they have. http://inbrief.threatswatch.org/2006/09/islamic-courts-union-consolida/
The ICU are warlords, just with a new bent.

Really? Is that in all of Somalia or just ICU land? What about Somililand? Are they pro-ICU? Do you have any sources you can cite besides "the news"?

The Nazis, Communists, and Taliban all brought peace to their countries. The fact is the ICU is just like the above groups, its expansionist and will kill anything in its way (it already as declared Jihad against Ethopia!)

"Yes the ICU may sympathize with Al Qaeda but that is none of our business."

So did the Taliban and we didn't care. The fact is the United States is engaged in a war against Islamic Fascism (http://catholicgauze.blogspot.com/2006/08/getting-to-know-enemy-islamist-fascism.html). Any threat must be dealt with right away before it can strike us.

When good men do nothing, evil triumphs.