Ukraine: An Artifact Like an African Country But One People Call Home

African countries are usually used as examples of geopolitical gerrymander that ignores history and ethnicity.  This complaint however overlooks that the nation-state was most a Western European creation that has been overlooked elsewhere including in parts of Europe.

Ukraine is one of these artifacts.  The below map from Twitter got me thinking about the creation of Ukraine.


The map is fairly accurate.  However, there never was one "Ukraine."  In the past Ukraine was a series of various Cossack states, Turkic colonies, Mongol vassals, and pieces of the Polish-Lithuanian Commonwealth.  The region was constantly torn between Polish, Russian, Turkish, and Hapsburg powers until World War II and even then the modern-day borders of what would become Ukraine were not set until 1954.

In January 1896 National Geographic showed just how new/artificial Ukraine as we know it is.  In the "Map of European Russia", the ethnic Ukraine homeland is known as "Little Russia".  "South Russia" (also known as New Russia) is the Black Sea coastline which was colonized by ethnic Russians and a few ethnic Ukrainians after Russia's conquest of the area from Turkey.

I geo-referenced the map as well as possible and drew in the borders of modern-day Ukraine.  Note how modern-Ukraine pulls from so many different realms.

This is not to say that many Ukrainians are calling for a split.  Most calls for an east-west split are coming from outside of Ukraine.  Not one Ukrainian politician of any merit on either side is calling for splitting the country.  Even though Ukraine was formed many different regions a nationalism has formed which has kept the country together and hopefully will keep bloodshed low.
Posted by Catholicgauze at 8:01 AM 1 comment:

The Ukrainian oblast of Lviv has declared autonomy from the pro-Russian government in Kyiv.  The oblast's legislature, known as the "People's Rada", unilaterally voted for autonomy  in protest against the pro-Russian national government's crackdown against protesters.

It is unknown if this declaration of autonomy will survive the post-crisis fallout.  If it does then Lviv's move would elevate the oblast to the same level of independence from Kyiv that the majority-Russian, more Russia-friendly than the national government Autonomous Republic of Crimea.  Like the Crimea, which was part of the Russian soviet republic and not the Ukrainian until 1954, Lviv has a unique background separate from much of the rest of Ukraine.  Lviv was not under Russian rule until the Soviet invasion of Poland in 1939.  Unlike Germany which was punished by loses of traditional lands at the end of World War II, the Soviet Union's 1939 alliance with Nazi Germany was blessed by the Allies which recognized the annexation of Lviv and other parts of Poland to the Soviet Union.  Before that the region was ruled by the Polish-Lithuanian Commonwealth (1340 to 1772), the Hapsburg/Austro-Hungarian Empire (1772 to 1918), and Poland (1918 to 1939).

An autonomous Lviv would also be the first self-ruling Eastern Catholic-majority state since pre-civil war Lebanon.  The Ukrainian Greek Catholic Church and the Ukrainian Autocephalous Orthodox Church are the largest religious bodies in the oblast.  The Kyiv-based and Moscow-based Orthodox churches are the weaker in Lviv than anywhere else in Ukraine due to Lviv's separate history.
Posted by Catholicgauze at 8:35 PM 2 comments:

California's Central Valley Drought: A Slow Moving Disaster Both Farmers and Conservationists Tried to Warn About (For Different Reasons) - Part 1

California's Central Valley is one of the world's most productive farmlands.  Eventhough it comprises less than one percent of America's agricultural farmland, it produces more than eight percent of all American agricultural output.  While that may sound small, if something bad were to happen in the valley American consumers would feel it in their pocket books. Sadly something bad is happening to the valley and its impact is coming.

There is a massive drought that is killing crops, running harvests, and destroying people's livelihoods.

Some people are blaming the poorly understood, even more poorly used catch-all "global warming" to explain what is happening.  The truth is more complex and much more tragic.  For different reasons both farmers and conservationists have warned about what was going to happen but only now are people noticing.  The drought and the valley are monuments, in both the good and bad sense, to man.

Working backwards from recent follies to first decisions, today's environmentalist movement has major blame in the drought.  The valley has a complex water infrastructure system dating back to the 1960s designed to withstand years of drought while keeping farming production at optimum levels.  However, since the 1990s and 2000s, environmentalists in government and judges have ordered water meant for the agricultural system be diverted to projects like keeping endangered species protected.

In 2009 farmers, conservatives, and even environmentalist-friendly Governor Arnold Schwarzenegger tried to warn that current policies were setting up the valley for failure.  The show, The Valley Hope Forgot, seemed conservative-alarmist in 2009 but seems prophetic now.

While farmers and conservatives do point out the recent causes of the drought, they ignore the longer term "ticking clock" that conservationists have been warning about for even longer.

Next post:  Part 2 - The Conservationists' Warning
Posted by Catholicgauze at 12:00 AM No comments:

Most of us have seen or heard of #sochiproblems, the tweet hashtag documenting problems and weird situations journalists and athletes are encountering during the Winter Olympics.  Some of the most popular tweets involve the water quality.

Z Geographer, however, has a bit of a rebuttal.  He sees a Western lack of understanding and a bit of being spoiled by living in the best parts of the United States as a reason this shocks people.  A key take away line is

All of these are very good points.  What may be "good enough" for Russian domestic tourists could seem backwards to Westerners.  When I was in Afghanistan, the only hotel in the nearby town was a seven-room house with each room having a bed and a space heater.  There was an outhouse in the yard.  Yet, all the Afghans I talked to about the hotel said it was a good place to stay if they had to spend the night.

Then again, as another friend said, the $51 billion dollars spent negates the poor infrastructure argument.

Posted by Catholicgauze at 12:00 AM No comments:

Email ThisBlogThis!Share to TwitterShare to FacebookShare to Pinterest
Labels: Miscellaneous

The Surveys of George Washington

Earlier I wrote about how George Washington, Thomas Jefferson, and Abraham Lincoln were geographers.  In honor of George Washington's birthday here is a speech Edward Redmond, Senior Reference Specialist and Curator in the Library of Congress, Geography and Maps Division, gave a lecture on the maps made by George Washington.

Posted by Catholicgauze at 11:52 PM No comments:

Map of the Birth Places of Presidents and their Wives

The MIBAZAAR blog has a nice map showing the birth places of United States presidents and their wives.

Happy Presidents' Day/Washington's Birthday!
Posted by Catholicgauze at 12:00 AM No comments:

The Overlooked Geopolitics of the Sochi Olympics Opening Ceremony

While most of the world was focused on rainbow colored gloves as part of the "Olympic Gay War" over Russia's "anti-Gay Propaganda" Law, people seem to have overlooked the obvious problem of showing country maps as part of the parade: disputed borders.

While the display was well neat, certain border calls and very strategically placed clouds made for interesting maps that so far have not started the standard geography war (maybe everyone is distracted with the homosexuality issue).

Nagorno-Karbakh were covered by clouds though lights can be seen.  This way Russia follows internationally recognized borders but avoids overtly offending nationalistic Armenians. 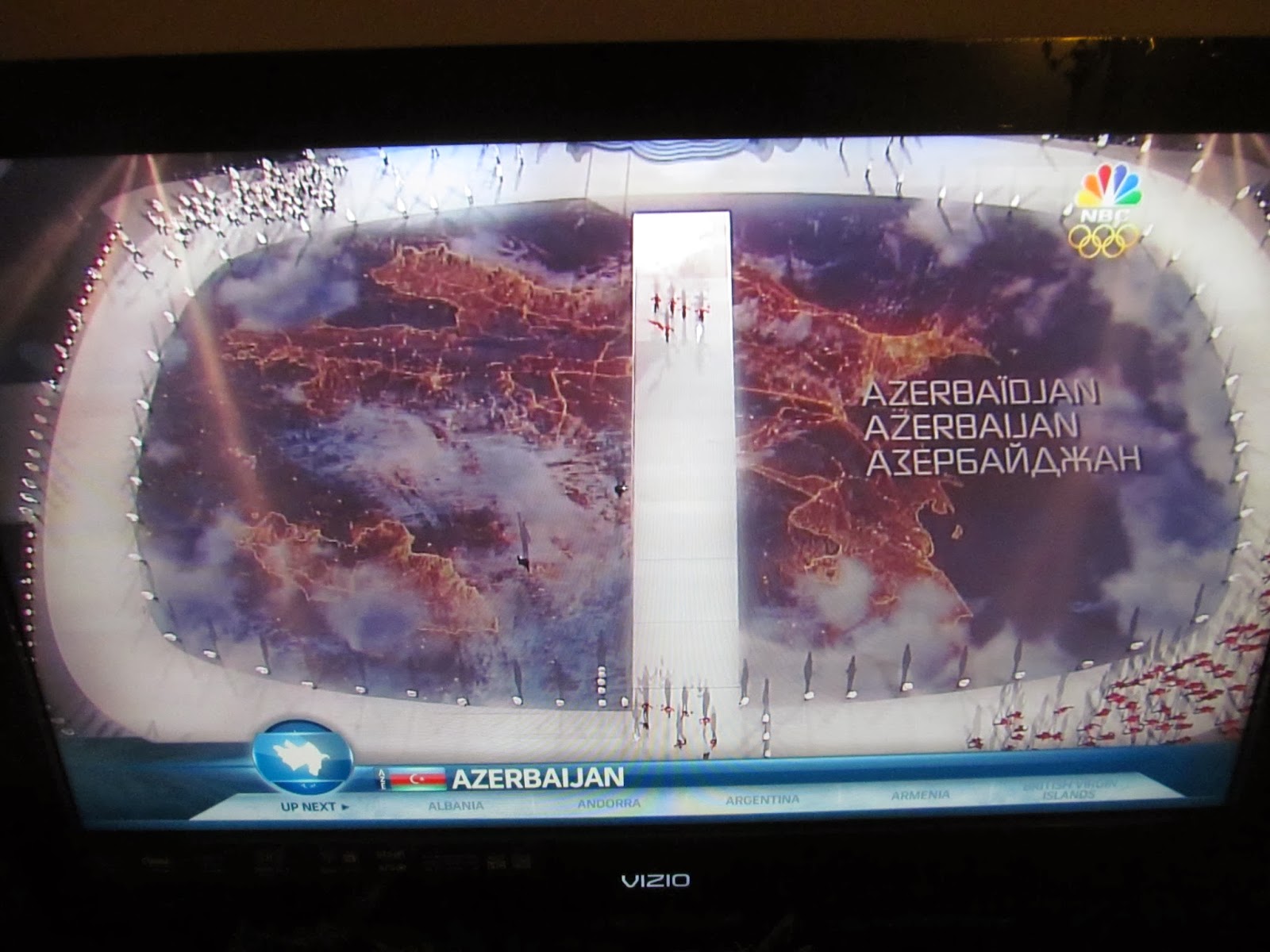 Israel was given the Golan Heights, West Bank, and even the Gaza Strip (which it no longer claims).  Very surprisingly given Russia's long support of Arab causes. 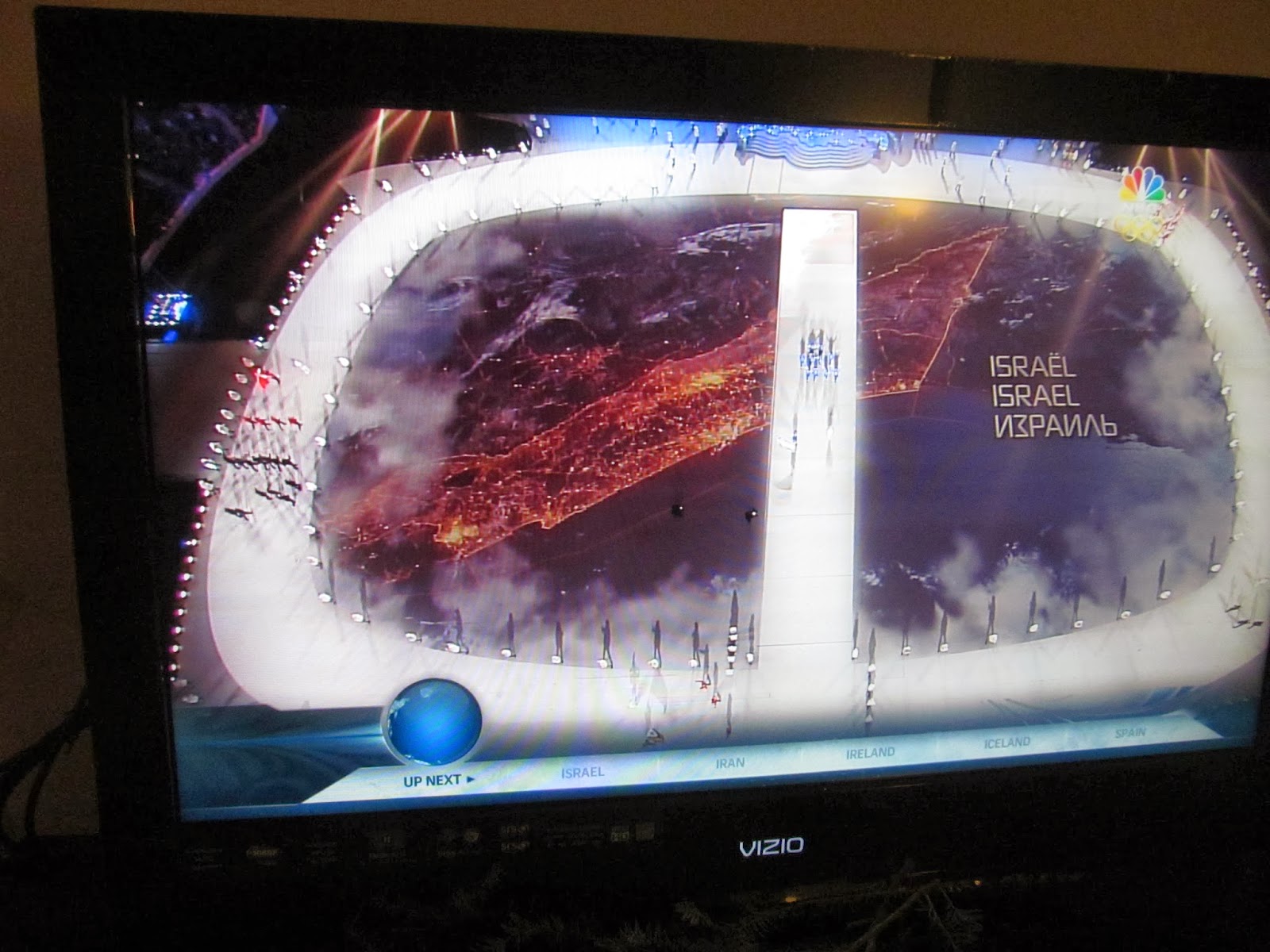 Very well placed clouds leave the status of Kashmir up in the air. 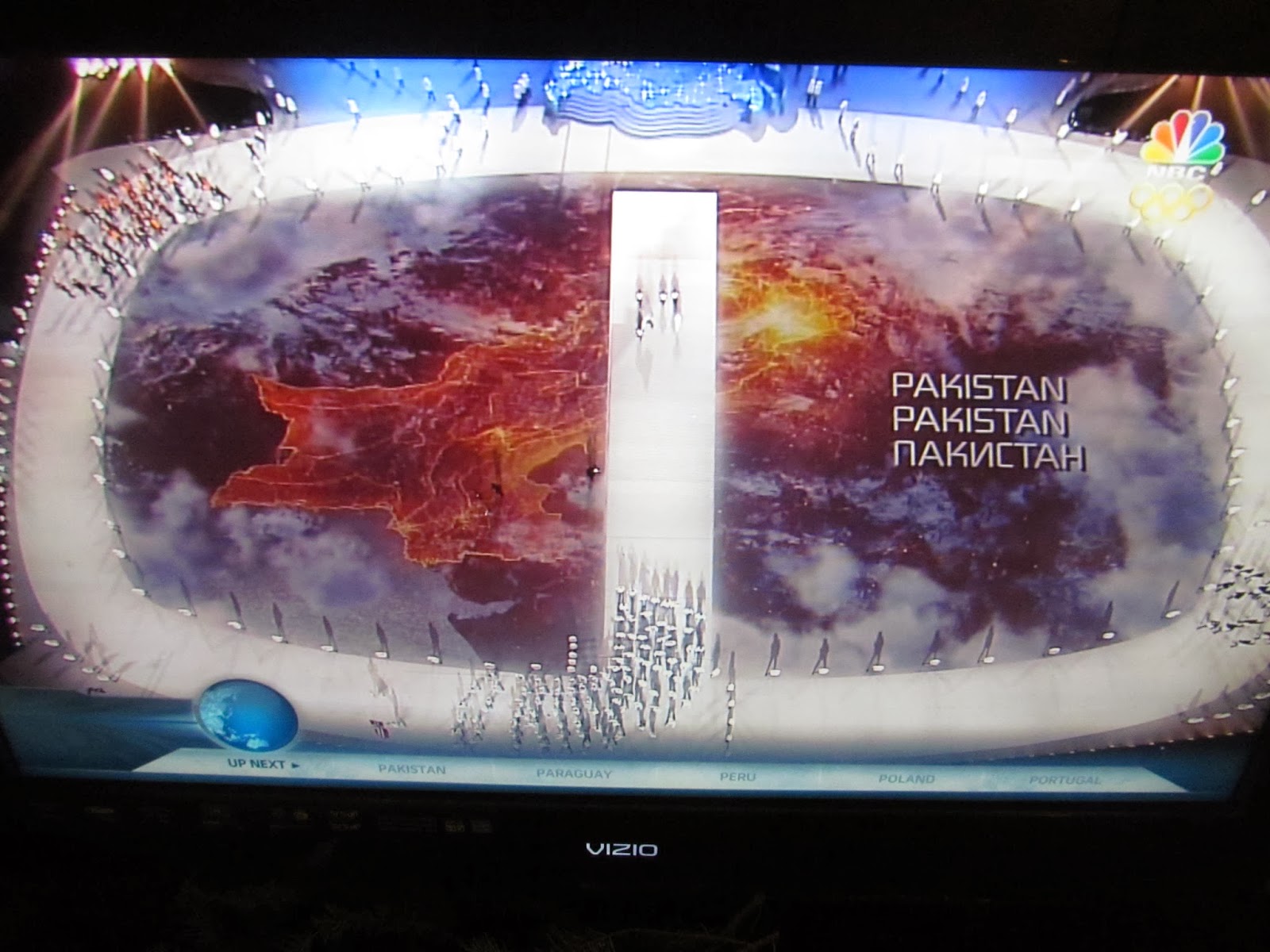 Hard to tell because of NBC's poor job but their graphic gives Kosovo back to Serbia.  If anyone knows what the map on the floor I would be grateful to know. 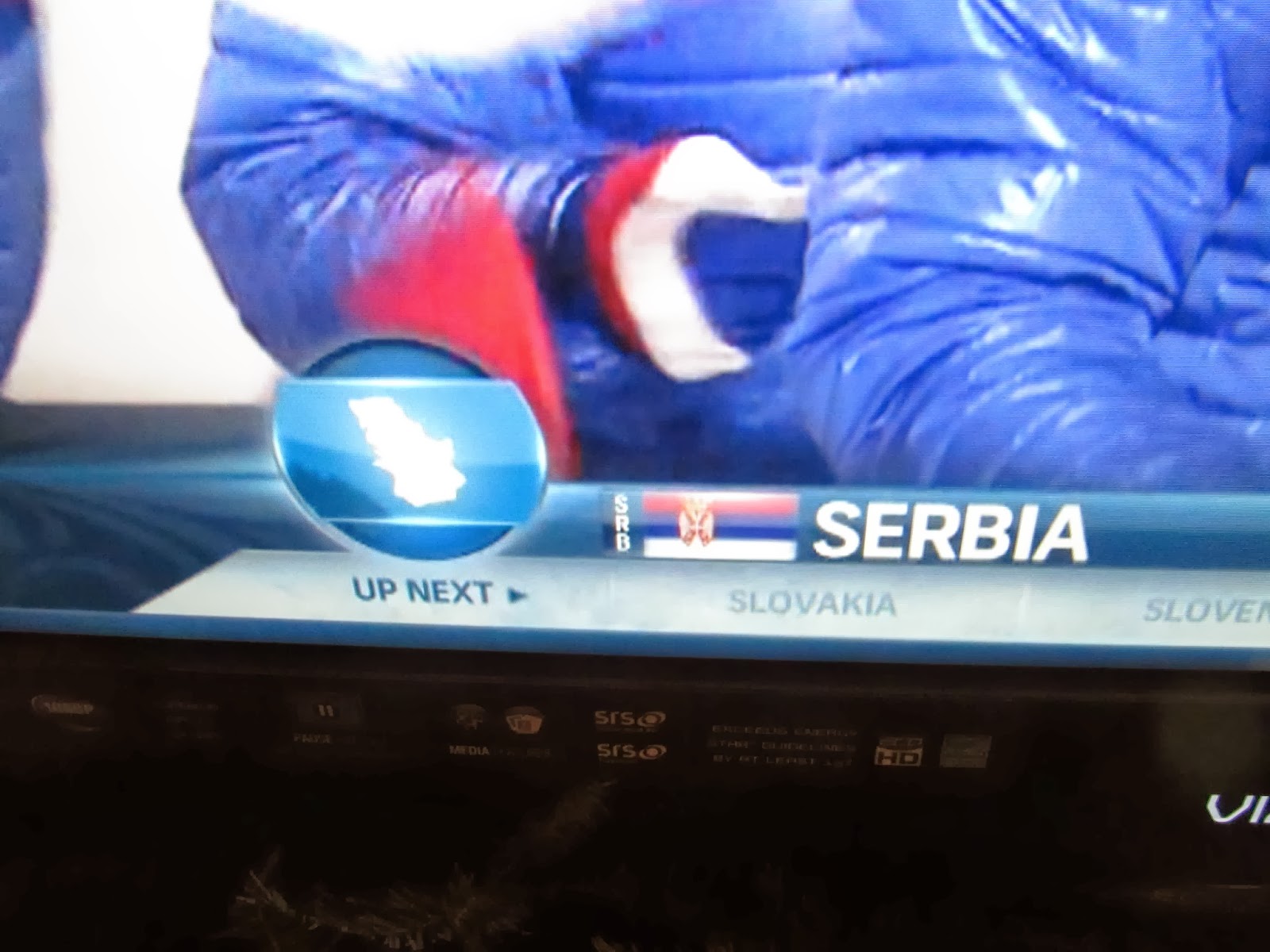 Additionally, the Falkland Islands/Islas Malvinas were left off Argentina's map because there spot was taken by the athlete's entrance ramp.  Sadly, NBC did not show what Georgia's map looked like.  It would be interesting to know if Russia gave Abkhazia and South Ossetia to Georgia or if they were covered by clouds in order not to offend anyone.

UPDATE:  Reader Rob From Amersfoort pointed out that Russia did use clouds to cover Abkhazia and South Ossetia.
Posted by Catholicgauze at 4:30 PM 3 comments:

Sochi: The Main Resort of the Russian Riviera

Back when Sochi was announced as the primary location for the 2014 Winter Olympics, some people may have thought a) why Sochi and maybe even b) but isn't Sochi as far south as Venice and right on a warm body of water?  Sochi is indeed a warm place with an average high of 50 Fahrenheit (10 Celsius) and an average low of 37 Fahrenheit (3 Celsius) in February.  In fact, the nice coastal climate has been given the name the Russian Rivera or the Caucasian Riviera.

So why Sochi?  Two reasons, first the nearby Caucasian Mountains and second the established tourism infrastructure.


The nearby Caucasian Mountains and their foothills give enough elevation for snow hills and tracks for many winter sports.  Meanwhile, winter and summer vacation has been popular in Sochi and the Black Sea Coast region of the Russian Rivera since the 1950s.  First it was for Communist Party elites but it slowly became more open to everyone.

Sadly some of the infrastructure began to fall apart in the 1980s and 1990s due to lack of funds and government priorities elsewhere.  This has left Sochi in a bit of a bind in which middle class Russian facilities and those for the ultra-rich are fine but facilities for athletes and foreigners are in such a sorry state that #Sochiproblems became a popular Twitter hashtag.

The main loser of Sochi, besides citizens who lost their pillows to foreigners and any anti-corruption Russian, is Abkhazia.  One in the de facto independent state/separatist region of Georgia can actually see of some of the Sochi facilities from the border.  Many Abkhaz's were hoping to cash in on the Olympics by offering affordable alternatives for staying and sight seeing.  However, Russia's anti-terrorism perimeter integrates itself to the Abkhaz-Russian thus practically closing down all traffic from the de facto republic to Sochi.
Posted by Catholicgauze at 11:48 PM 1 comment:

Bill Nye versus Ken Ham: Simplified Thinking All Around

Note: I know good people on all sides of the evolution debate.  Some base their opinions on logic and a scientific model and others on their faith.  Some using the the logic-scientific model accept a form of creationism while others who rely on a form of faith accept evolution.  Of course, the vice versa is also true.  This post is not meant to take sides on the debate but merely point out the flaws of the debate.
On Tuesday, Bill Nye "the Science Guy" debated Ken Ham, head of Answers in Genesis and the Creation Museum.  Nye dominated with logic and scientific examples while Ham relied primarily on the Bible instead of more scientific explanations.

It was not a representative debate for anyone.  First, "creationism" and "evolution" were not defined.  Old Earth Creationists, Progressive Creationists, and Theistic Evolutionists were ignored by Young Earth Ham.  Meanwhile, Nye never went into the internal divides of evolutionary theory.  For example, if you consider yourself a "Darwinist" you are outside the scientific mainstream.  Darwin's gradual evolution has been replaced by most scientists in favor of punctuated equilibrium.

The debate in the end was by two people deeply convicted in their own views which they presented as the only view.  Mr. Ham dismissed every sort of God-related theory but his own and Mr. Nye completely ignored any theory of evolution that involved God and kept his argument vague enough to not disown Darwin.