Freedom of the Press Worldwide 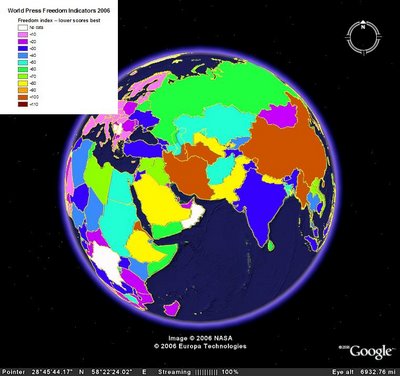 Let us compare Western and Eastern Political Cultures
Reporters Without Borders recently released their analysis of freedom of the press worldwide. In double cool news one can download a country-by-country breakdown for Google Earth! (Hat tip: La Cartoteca)

Countries that have a liberal, open society score on the upper end. The best places to be a reporter are apparently Ireland, Iceland, Finland, and the Netherlands (unless you want to take on the Sharia microstate, then you get murdered). On the other hand fascist, communist, and just thuggish countries have very few freedoms for their reporters. Countries joining North Korea, Turkmenistan, and Eritrea (where being a gospel singer can get you arrested) on the nasty list include the People's Republic of China, Cuba, and Burma.

Category: Miscellaneous
Posted by Catholicgauze at 12:14 AM