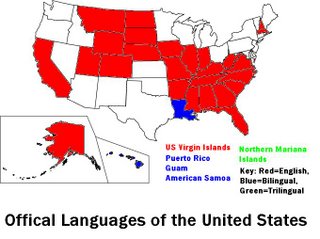 The United States Senate voted recently to make English the official language of the then it voted to call English a common and unifying language. While the rest of the nation struggles to understand just what that means; one may be interested in knowing many states are already officially English and some states and territories are officially bilingual or even trilingual.

Twenty-six states and the Virgin Islands all have English (American version) as their official language. There has been controversy; however. once tried to make English its official language but was stopped by the state supreme court which ruled the law "too board." The law resembled ’s French first law where store owners could be punished for not printing text in official language.

Some parts of the are bilingual.

There are outliers with these facts too. government's uses both English and Spanish while not having any official language(s). 's state constitution was printed in multiple languages because the various immigrants groups distrusted each other. recognized English and German until the 1950s. The census conducts surveys in English, Spanish, Chinese, Korean, Vietnamese, and Tagalog (Philippine). Finally, various Indians reservations use English and native languages interchangeably.

If English does become the official language of the it would be interesting to see if the bilingual states and territories will be grandfathered in or if the law would overturn multilingual laws.

What type of American English do you speak? Find out with Yall Tock Funny Ya Hear

Want to find out the difference between American English with that from the motherland and Australia along with Cajun versus Fromage? Find out with Figjam

Posted by Catholicgauze at 7:37 AM