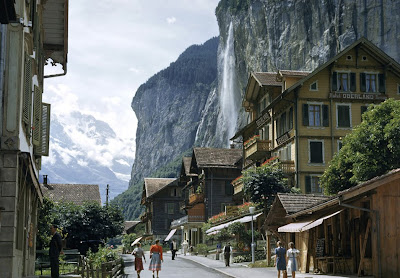 Truly a work of art. Click to enlarge. From PDN Photo of the Day
Kodak Film has announced that it will stop producing and processing Kodachrome film. To those who may wonder why this is geographic news the answer is a painful one. Kodachrome film is the color film that made National Geographic famous. The color images from 1937 up until the digital age were all done with Kodachrome.

The baroque era of National Geographic Magazine began with their color photographs. Before, in the classical era, the magazine has superb articles with black and white images. But Kodachrome gave the magazine color and an extra enriching feeling. The famous images of the 1930s, 40s, and 50s had a slightly off-feeling that made the photographs works of art. I always felt this "offness" was a plus. Editor Melville Grosvenor felt the same way; he order photographs to include red objects like shirts to add a sharp color contrast to images.

National Geographic magazine is marking the end of Kodachrome with a short news story and a new exhibit at the museum in Washington, D.C. in the United States. I plan to visit and remember the feeling the first time I explored the world through old National Geographic photos.
Posted by Catholicgauze at 12:01 AM

Email ThisBlogThis!Share to TwitterShare to FacebookShare to Pinterest
Labels: Miscellaneous

Yes, yes, you are exactly right.

I never could put my finger on it, but the NGS photos from that era were always slightly unreal... Like Film, Kodachrome created a visual representation more real than what we can really see.

Sad news, now that I know.

It’s so nice site. We love to see more on this site. Keep on updating… MonkAreRee Bali ***