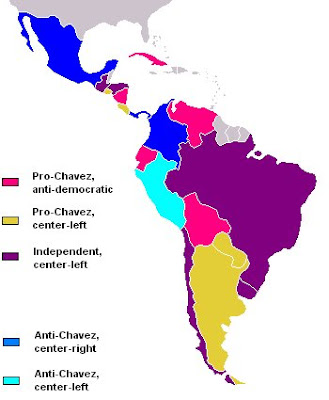 Map of the various countries' positions on Chavez. A Catholicgauze Map.
This past weekend the military of Honduras responded to requests by the Supreme Court and congress and removed President Manuel Zelaya from power. The military has stepped aside and let the congress vote Roberto Micheletti, member of Zelaya's party, as interm president. This affair has made Honduras the latest pawn in the great game of pro and anti-Hugo Chavez powers in Latin America.

The coup is more of a Turkish-style, military act to preserve democracy than the historical Latin American banana republic-style coup. Zelaya was the leader of Honduras' Liberal Party, a center-left political party that was more moderate left than social democrat. However, Zelaya was overtly a fan of Chavez's leftism and anti-democratic policies. Zelaya declared that there would be a referendum to allow him to stay on as president despite the constitutionally mandated term limits. Congress, the Supreme Court, and even the Liberal Party stated that this was illegal since only the congress could call for a referendum. When the military refused to set up the voting booths, Zelaya had ballots flown in via Venezuela and foreign "volunteers" began the process of setting up the voting infrastructure. The military leaders then met with the other branches of government and the coup was plotted.

The change of government has been denounced world wide including both American President Obama and Chavez, who threatened violence against the new government. This is Chavez's first real international setback since the earlier 2009 presidential elections in Panama.

Hugo Chavez has been supporting much of the "pink wave" that has flooded across the Latin American political scene. Chavez first attempted to overthrow the Republic of Venezuela in 1992 but had to wait until 1998 to gain control of Venezuela legitimately. It was not until the rise in oil prices in the early 2000s that Chavez could afford to export his ideals. Since then he has funded leftist elections in El Salvador, Nicaragua, Ecuador, Bolivia, Paraguay, and Argentina.

Minorly supporting/tolerating/ignoring Chavez are democratic, center-left governments like Brazil and Chile. These countries' governments are dedicated to social-economic planning yet still allow for liberal democracy. The only countries in Latin America actively opposing Chavezism are Mexico, the current president defeated the Chavez-funded candidate; Colombia, the government is fighting FARC rebels who are funded by Chavez; and the center-left government of Peru, the formerly left president is now more reformed and opposes Chavez's "social projects" in Peru.

It was hoped by some center-rightist, classical liberals, and democrats that the fall in oil prices would cripple Chavez's ability to interfere in democracies. However, the recent bounce in prices has replenished Chavez's treasury. Until then Latin America will play a great game rememnecent of the Cold War and the first Great Game.
Posted by Catholicgauze at 12:02 AM

Email ThisBlogThis!Share to TwitterShare to FacebookShare to Pinterest
Labels: Geopolitics

Interesting map. I think you go a little beyond objectivity when we tag some countries/governments as antidemocratic, though.

Anonymous,
Thanks for the comment on the map. However, I still see it as being objective. Cuba and Venezula are certainly not liberal democracies while the other pink countries are following closely in their footsteps. Parties being banned, opposition members arrested, open threats against the press, government impressing private property. All this is certainly not democratic.

Very nice analysis. You are quite accurate using the "antidemocratic" label to describe Chavez and his thuggish pals, of course.

Obama's support of Chavez, Ortega, Castro, and the other bloody handed dictators of New Spain is troubling, and needs to be examined more closely. Why is Obama so sympathetic toward anti-American dictators? It is almost as if he himself has an anti-American bias, if you can believe that of an American President!