Every once in a while it is wise to stop and examine the world with fresh eyes. A new look at old events can give one an insight on where global events could go next. 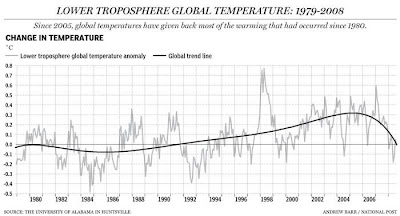 It is too soon to be a solid trend but a clear downtrend is seen in temperature charts. After a few years of doomsday warming trends it is now becoming more and more common to see reports saying the world is in for a twenty to thirty year cooling phase. The lesson to pull from this is that climate is neigh on possible to predict while make plans for both global warming and cooling cannot hurt. The last bit needs to be tempered with the statement there is a difference between making plans and trying to rush international climate treaties before scientists truly know what is occurring.

The global hierarchy of al Qaeda proper has been destroyed or made irrelevant (good), Iraq's violence is down to about a quarter it was during the dark days of 2006 (good), and Afghanistan's violence level is slightly above Iraq's (bad, it has been rising). Elsewhere the Philippines is talking to the Moro Islamic Liberation Front and giving them terroritry (not good but stops killing) while Abu Sayef is run down (good). There is no longer a difference between Pakistan and Afghanistan as military operations cross borders almost daily. Meanwhile al Qaeda in the Islamic Maghreb is reminding Algerians of the bad days of the 1990s. The truly dark spot is in Somalia. After a series of victories by the government and their Ethiopian backers the former youth wing of the Islamic Court Union, Al-Shabaab, has received al Qaeda backing. Al-Shabaab has taken the south and is directly engaging the government, Ethiopian, and African Union soldiers.

The plotters of 9/11 are in the background while their smaller children seek to fill the vacuum.

The Economy and the Fall of Oil Prices

The days of credit given to those who cannot handle it sure shook the world. Economies in recession led to markets slowing down. The big under reported story of this downturn is the falls effect on oil prices. As of late October oil prices were trading below $65 a barrel. For the last several years dictatorial countries like Russia, Venezuela, and Iran managed to expand their operations with gas profits. Will these powers slim down their operations or will they fall like the Soviet Union under pressure from their growing monetary demands.
Posted by Catholicgauze at 12:09 AM

Email ThisBlogThis!Share to TwitterShare to FacebookShare to Pinterest
Labels: The World

Global warming has become so entrenched ideologically that it will be another generation before people start taking notice of global cooling.

strange trendline on the 'cool-down-chart', it starts above the chart, goes up very gradual and goes down really charp in the end to end exactly on the chart.
I'm curious who made it with what perpose.

I agree it is very hard to proove global warming, but this is the very first time I see something recent about global cooling.
I would like to know which reports talk about that.
If you leave out that horrible trendline that isn't a realy trendline I wouldn't conclude global cooling from that chart.

Kilgoretrout,
Thanks for the comment. The chart was done by the University of Alabama. Global cooling is slowly getting back into the news. You are right that this does not prove "global cooling" but does indicate a cooling trend. Something to keep our minds open about.

For climates, 1 year is really to short for a trend, if this theory is by a university, I'm really surprised by their incompetence.

Let's hope they are right, but then still the ever decreasing reserves of fossile energy is still a very good reason to make a radical change in our way of living.

I agree that we must keep open minds, but the more compelling argument is that a few year (even 30) is nowhere near enough to identify a climate trend.

To review 400,000 years of trends that show we are in for significant warming please refer to a chart published on the US EPA website:
http://www.epa.gov/climatechange/science/pastcc.html.