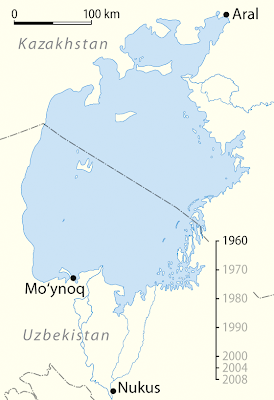 Environmental problems may not frequently come to mind when one thinks of Communism but the track record is proven. Communist governments frequently emerge from feudalistic or plutocracies. These new governments seek a rapid industrialization so the rewards of the commanding heights may be spread amongst "the people." The mad drive for industry has come at a great cost to the environment. No Communist government has come around to "green" philosophy while both social and liberal capitalistic societies can afford the costs of environmental programs.
The environment's first victim of Communism was the Aral Sea. In 1918, the new Soviet government in Moscow decided Uzbekistan's quasi-desert would be the perfect place to grow cotton. The Communist sought to have the plant as a major income earner as an export. They achieved their goal by diverting river water that formerly fed the Aral Sea.
The sea slowly started its fall in the 1960s. The waters then fell faster and faster. First the fishing boats became stuck in deserts, then the water became so salty the fish died, finally the lack of a moderating body of water introduced extreme temperature swings with salty sand storms. In short: the Aral Sea area become one of the worst places in the world.
The situation today is not good. The blog Coming Anarchy reports on the status of the sea. The northern surviving portion, the North Aral Sea, is slowly growing because of efforts by the government of Kazakhstan to redivert water from the Syr Darya river. Meanwhile the southern surviving portion, the South Aral Sea (really two lakes since 2003), is dying. The eastern lobe is especially dwindling rapidly. The government of Uzbekistan is unwilling and unable to stop the trend.
Many modern maps like Google Maps use old data to show the Aral Sea at its previous size. One of the main reasons for this bad cartography is laziness because of the over reliance of pre-made data. But, according to a conversation I once had with a cartographer of atlas from Europe, there is little interest in updating the Aral Sea boundaries because of the politics behind the matter. I was told something along the lines of "if the loss is shown, then there would be a greater push to fix it and find blame. Think about Lake Chad, desertification, glacier melting."
Posted by Catholicgauze at 12:06 AM

The statement that cartographers are lazy because of over reliance of pre-made data is patently false. The two most authoritative atlases, the National Geographic Atlas of the World and the Times Comprehensive Atlas of the World have in at least their respective last two editions depicted the Aral Seas as fragmented. These updates were draw from satellite imagery. Let's give credit where credit is due.

Mapman,
Thanks for the comment. I never accussed NG or Times as being lazy. I am stating that many cartographers are. Most do not work on atlases but are professionals or students. There are many who rely on old map data with errors as big as no East Timor or other new countries to the smaller levels like no updated road data showing development. That is patently true (take it from me: a professional geographer who has taught at the college-level).