Back in 2003 I was discussing the geopolitical chess game in the Middle East with regards to Iran and the so-called Shia Crescent which linked Iran, a Shia-majority Iraq, Shia-like Alawaite Syria, and the Shia plurality in Lebanon.  The professor shot back saying that instead of a crescent, Iran was surrounded by hostile powers and the U.S. military.  Turkey, Egypt, Yemen, and Israel took hostile diplomatic lines against Iran while the American military was located in Iraq, Kuwait, Saudi Arabia, Bahrain, Qatar, and Afghanistan.  Israel helped by being a military opponent of the Iranian allies Hamas and Hezbollah. 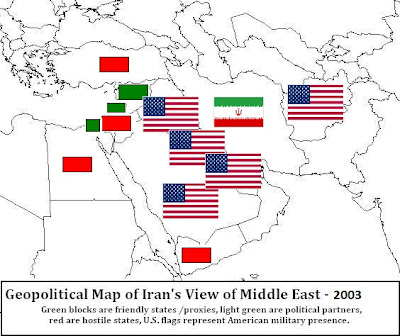 A few days ago I remembered this conversation and realized much has changed. 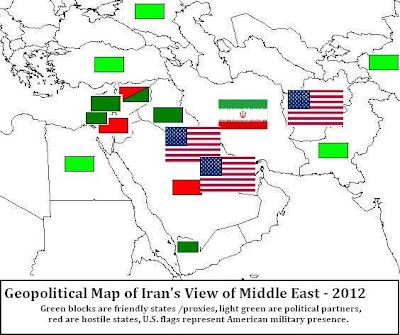 The U.S. still has military in Kuwait, Bahrain, and Qatar but at a much smaller level.  Troops in Afghanistan meanwhile are held in place by the resurrected Taliban.  Yemen's leadership has changed with the Sevener Shia rebel Huthis holding northern Yemen.  Iraq has an Iranian-friendly government with many Iranian proxies in place.  Egypt's new military/Muslim Brotherhood government in formation has taken a much softer line towards Iran.  Hezbollah is unchallenged in Lebanon after a series of military victories against both Israel and other Lebanese militias.  Meanwhile, Turkey's government has become noticeably much more friendly to Iran while both Russia and the People's Republic of China are vocal diplomatic allies of Iran.  A major shift is Pakistan being much more diplomatically engaging with Iran due to Pakistan's frustrations with American activities in Afghanistan.  Finally, Syria is split in civil war and Saudi Arabia remains hostile towards Iran but without a significant American military presence

Just because Turkey and Egypt have taken a friend line towards Iran, this does not make them military allies ready to stand up for the Islamic Republic in case of war.  However, the military and political shifts has clearly made Iran's geopolitical position much more favorable to it compared to the country's situation in 2003.
Posted by Catholicgauze at 12:00 AM

You really don't know what you're talking about when it comes to Iran's relationship with China, Russia and Turkey. Those three are looking out for their own interest... China wants to undermine the role of the US in the Middle East. Turkey want to prevent another war in the region and keep economic stability in their country seeing that all of their neighbors have economic problems now (Eurozone debt crisis, Russian & Former Soviet economic instability, Arab Spring, Israeli inflation, and Iranian economic sanctions). While Russian shares both cases for having a much more lenient role when tackling Iran.

Thank you for the comment. Of course these countries are looking out for their own interests, that is what all countries do with diplomacy. My point is that their interest and goals have them promoting Iran.