Representations of Indians and US Army along the Oregon Trail: Rossville, Uniontown, and Saint Marys 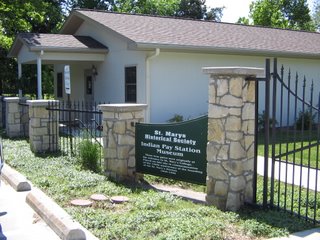 After leaving one diverts off the interstate onto Highway 24. This stretch of land along the has significant Army and Indian history. The river itself was originally named the after the Kaw Indians (who were also known as the Kansas Indians). Before the hump of overland migration John Frémont led his men west on the expedition that earned him the name "the Pathfinder." During Bleeding Kansas United States Cavalry and Dragoons patrolled the road in a vain attempt to keep the peace. No markers along Highway 24 mentioned these facts.

The first stop was at the in Rossville. The Citizen Pottawatomi are the descendents of Potawatomi Indians who accepted citizenship in the 1860s and merged into the popular culture. They are the largest tribe in yet have no reservation due to the 1860s treaty.

The center itself is merely a few offices and a convention center. Decorations are the tribe’s constitution and general, stereotypical Indian depictions. Included are a painting of an Indian maiden of a stereotypical tribe and the "Founding Fathers" Rushmore painting. Through sheer luck I was able to meet one of the leaders of the tribe. He was a man in his 60s with white skin and a rather heavy mustache. We talked about the tribe’s history in the area. I remarked about the family portraits he had on his wall. They were from the early 1900s and the people had clothing on which would make my blue-blooded ancestors seem like poppers. Fancy dresses and suits abound. I mentioned how they all seemed "white" and he replied that half the people in the picture would "deny with all their effort they were part-Indian. Being Indian was worse than being black back then." I found it a bit ironic that the convention center had generalized Indian decorations and only the office of one of the officials would have tribe related history.

As I left the center I was told the nearby housing project was being built by and for tribal members. It looked like any small town housing project. He also told me a bit of Rossville's history. The last treaty with the Pottawatomi in was signed here. No maker existed in the town about this. Local history ignores that fact.

Near Rossville was once Uniontown. The thousand plus town was the largest population center in before the Kansas-Nebraska Act. Uniontown was setup by the government as a place where white artesian could do work for the Pottawatomi and where Pottawatomi could run stores selling supplies to emigrants along the trail. The town was devastated by a cholera outbreak in 1849. The only thing left of the once great town are graves marking the white victims while the Pottawatomi were buried in a mass grave. The gravesites are now on private property in a corn field but are in the process of being transferred over to the Citizen Pottawatomi where they plan to memorialize the town and dead.

Next up is Saint Marys. Blogged about before St Marys was the site of a Jesuit missionary and school founded by Farther DeSmet. The mission served the Pottawatomi and offered housing and supplies (for a price of course) to emigrants. The mission site is now in the hands of the Society of Saint Pius X (who is in schism against and has a great distrust of Catholics- including Catholicgauze).

Right next by is the Pottawatomi Pay Station and Saint Marys Museum. While the operators are very clearly SSPX members I was able to befriend the ladies and gain a tour of the museum and unlimited access to their library. The pay station was where the government handed out money to tribe members as promised in the various treaties. White traders attempted to secure crooked deals with various Indians but were prevented by Louis Vieux, a Métis and chief of the tribe at the time. The Museum prided itself with local Pottawatomi history and my tour guided repeatedly mentioned how the Jesuits tried to help and save the Indians from complete cultural destruction. Various exhibits showed the history of the tribe and Church.

Saint Marys town emblem is a great contrast to the accuracy of the museum. The local Indians like the Pottawatomi lived in multi-family log houses and the lived in permanent huts. However, the teepee, a temporary housing structure used by nomad tribes, was used to represent the Indian heritage of the town. Shame.

I left Saint Marys for the long drive into . Several stops were in my way; however, before I left the .

Posted by Catholicgauze at 12:41 AM