Battle of the Basilica of the Sacred Heart 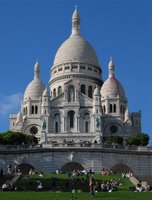 The Basilica of the Sacred Heart (Basilique du Sacré-Coeur) is a church in , which has been and still is a discussion in the topic concerning the cultural landscape and politics of .

The politics behind the church go back as far as the Age of Enlightenment. Conservatives and Monarchists were tied with the Roman Catholic Church as symbols of authority and the status quo. Liberals and radicals opposed the Monarchy and there for the Church as being oppressive against them and the people. Things came to ahead during the French Revolution where radicals were violently anti-clerical and attempted to stamp out Catholicism from .

The revolutionary government was eventually done away with and for the next 70 or so years 's political landscape was in turmoil. Brief pro-Church monarchies would appear and disappear with republican governments then trying to reserve any Church gains.

Two very different reins would affect the outlook of French Catholics. Napoleon III stabilized State-Church relations until he committed the "forgivable" sin of withdrawing French troops from the Papal States thus leaving it open to Italian unification. During (or after depending who you ask) the Franco-Prussian War, seceded from the rest of forming the Paris Commune. The Commune was very radical and strongly anti-Catholic. The government assassinated many priests and even the liberal Archbishop of Paris. With the backing of the Prussians, the French attempted to peaceful secure . On the hill Montmartre two French generals were seized by their troops and executed by Commune forces. The reprisal was possibly the most intense and bloodiest French on French violence ever (for its time span). Army corps battled in the streets gaining ground with death squads sweeping the liberated zones for leftists. Several of the Commune supporters were dragged to and executed.

Catholics in thought the loss against and the violence in was punishment from God for the crimes against Church. They sought to rectify 's mistakes by making a monument to God which would forever show French piety. The cult of the Sacred Heart, traditionally strong in and supported by Monarchists, suggested building a church dedicated to the Sacred Heart. The new Archbishop of Paris suggested Montmartre because of its imposing view over and because it was the sight of the "martyrdom" of two French generals. Catholics in the government passed through legislation supporting the use of government funds to build the church. The construction of the Church was seen as a national effort.

Liberals and radicals oppose this however. They objected to the symbolism which they saw as a monument to the old ways. Radicals saw it as an affront to the memory of the Communers who were executed on the hill. After efforts to stop building the church failed by legislative means many proposed the government a statue of liberty (the first one was being built for the ) in front of the church. This monument would be dedicated to liberty and freedom of thought; indirectly opposing the church at the time.

The church influenced the French middle at the time. Groups were encouraged to donate funds to construct chapels in the basement. One of the groups born out of the fundraising was a society of Catholic industrial workers. These were religiously devout Catholics who also supported social justice and other social causes. In 1899, Pope Leo XII rededicated the Sacred Heart to racial harmony, social harmony, and conciliation. This allowed Christian Democrats and other Catholics who did not support the Monarchy to support the idea of the Sacred Heart church.

Final consecration was delayed until the end of World War I. There was a huge celebration for the church and the French victory. For a while church's political statement lessened until the days of French radicalism returned. In 1971 radicals attempted to storm the church because they believed it was a symbol of government oppression. Later that year a small bomb went off exactly 100 years to the day of the execution on the Communers. Things have settled down once again. However, to this day the church is a controversial piece of the French political and cultural landscape.

Category: Miscellaneous
Posted by Catholicgauze at 12:32 AM